A Language Revitalization workshop was held over 4 days in July 2013 in Kolonia, Pohnpei State, Federated States of Micronesia (FSM) hosted by the Island Research Education Initiative (IREI) and the FSM National Dept. of Education and Special Education Program. Greg Anderson and David Harrison of the Living Tongues Institute led the workshop, which aimed to leverage new digital technologies in support of Micronesian languages. Yvonne Neth of IREI was the local coordinator and partner.

The Living Tongues Institute for Endangered Languages team that ran the workshop consisted of five members with the following division of labor:

The participants were energized by the workshop and delighted to be taking part. As Johnny Rudolph, Nukuoro language expert, put it: “The workshop was a great one and everybody did enjoy it very much and most importantly…[it] guided us to see and understand the importance of preserving our languages before losing them.” Johnny continued: “As for our Nukuoroan language, I feel very enthusiastic and enlightened with what we’ve learned… I chose to move forward and continue to build the Nukuoroan Lexicon into the computer system while inserting sounds, photos and perhaps to start teaching others how to use the Nukuoroan Lexicon on the internet while holding Nukuoroan language classes in either in public school or in other special educational learning settings.”

The nine dictionaries created during the workshop currently have nearly 12,000 lexical entries, many with soundfiles, and some with cultural photos. Community members will continue to expand these in the near future, and will use them in language revitalization efforts.

Link to all dictionaries: http://talkingdictionary.swarthmore.edu/workshop.php

Following the workshop, the team visited remote Mwoakilloa Atoll, a landmass of only 0.8 square miles located in the outer reaches of Pohnpei State in the FSM. Here we continued work on the Mokilese language and collected words, sentences and folk stories from both elder and younger speakers in Mokilese. These will be added to the Mokilese Talking Dictionary and our YouTube video channel in coming months. We observed and conducted interviews about oral history, traditional foodways, fishing, outrigger canoe building, and navigation technology.

Mwoakilloa represents a unique and endangered speech community within Micronesia, as the Atoll has a permanent population of under 100 people. With most Mowoakilloans living away from the atoll, the language is vulnerable. At the same time, the community has mounted ambitious efforts, including a new Bible translation, children’s books, and the Talking Dictionary in an attempt to stabilize the language. We are grateful to Roz Ho and Jack Daulton for providing financial and technical support during the expedition. Jeremy Fahringer at Swarthmore College developed nine new Talking dictionaries for the workshop. Taking part in both the workshop and the trip to Mwoakilloa was Yvonne Neth, Vice-Director of IREI. 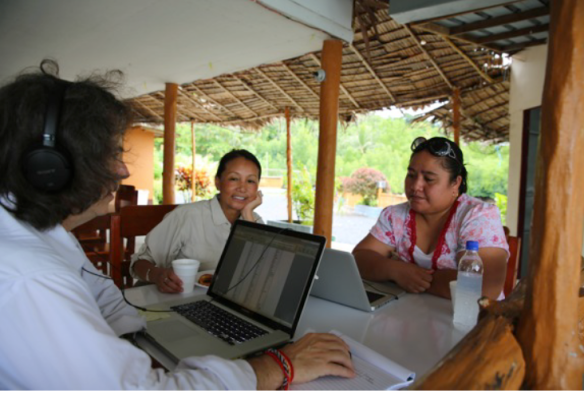 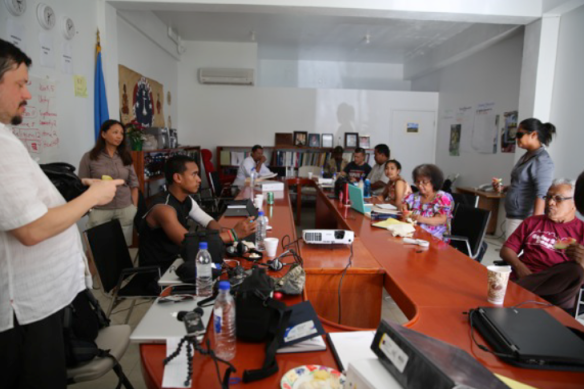 Day 3 of the workshop, at the FSM Department of Education. Photo Jack Daulton. 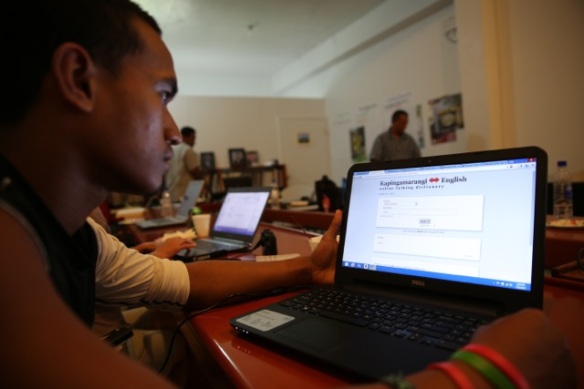 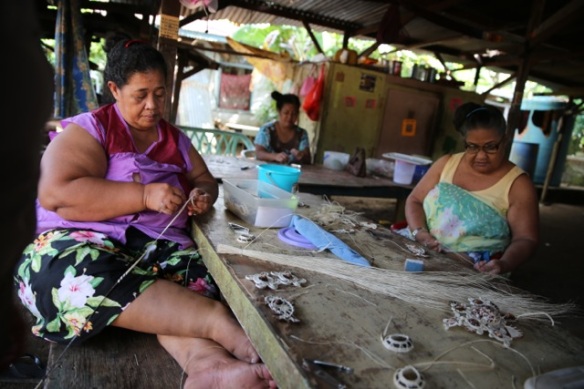